Flooding is exposing more people to industrial pollution, researchers say. The risks are greatest in cities and for marginalized people.

Although goods are often shipped globally, many companies manufacture and sell region-specific products.  That divide allows the company to cater to local market preferences and regulations and also avoid potential arbitrage.

In the 1970’s Coca-Cola withdrew its flagship sugary cola from the Indian market at a time of heavy regulation of foreign companies. A local company then started Thums Up and it quickly became popular across the country.  Although similar to Coca-Cola, Thums Up is ‘spicier’ and you can almost taste the cardamom and cinnamon.  In the 1990s, the Indian market opened again to foreign competition. Coca-Cola purchased rights to Thums Up along with Limca lemon-lime and others and continues to sell those products in India (as well as other countries).  Coca-Cola holds the trademark rights in India, but not in the USA.  Apparently Coca-Cola abandoned its US version of the THUMS UP application back in 1987 and its US LIMCA mark expired in 1996.

About 5 million Indians and Indian-Americans live in the USA, and some of those people want to purchase Thums Up and Limca.

Americans are more forgiving of lies when they come from politicians in their own party, research finds.

“AI affects the climate in many ways, both positive and negative, and most of these effects are poorly quantified.”

Gene-edited foods won’t require labels when they show up in US grocery stories. That may be right, but what if consumers feel betrayed? 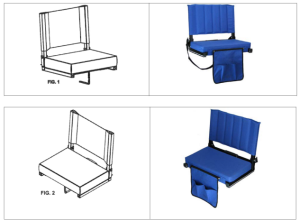 Back in 2018, Static Media sued Leader Accessories in W.D. Wisconsin for infringing its U.S. Design Patent D771,400, covering an ornamental design for a stadium seat.  The case ended with a summary judgment of non-infringement. The district court found a large number of similar prior art designs and thus narrowly construed the potential infringement window.  The district court then walked-through a number of differences that would preclude a finding of substantial similarity, including the quilted vertical columns,; difference in the lower portion of the back (straight vs sloping at the edges); narrower seat cushion; distinctive storage panel with two pockets; etc.

Parallel Cases and a JDA: While the Leader case was ongoing, Static Media also threatened and then sued OJ Commerce for infringing the same patent.  The two defendants – Leader and OJ – entered into a Joint Defense Agreement (JDA) for the purpose of creating a common defense in both cases with Jeff Lee representing Leader and Sam Hecht representing OJ.

The Wisconsin case was subject to a confidentiality agreement/order.

“We can make a computer edit images entirely based on thoughts generated by human subjects. The computer has absolutely no prior information…”

An economist explains the causes behind product shortages and supply chain problems. He also says that they won’t end anytime soon.

The United States Constitution was ratified in 1789.  The following year, Congress passed the first patent act that was then signed-into law by President George Washington.

When the Patent Act of 1790 refers to inventors, it lists gender inclusive forms of “he, she, or they:”

[The inventor(s) must] set[] forth, that he, she, or they, hath or have invented or discovered any useful art, manufacture, engine, machine, or device, or any improvement therein…

Patent Act of 1790. Three years later, Congress substantially rewrote the statute and, at that time changed the pronouns.  The new law eliminated the female pronoun “she.”

Continue reading He, She, or They in US Patent Law at Patently-O.

Developing and approving new prescription medications can be costly and time-consuming. A new use of machine learning could partially change that.